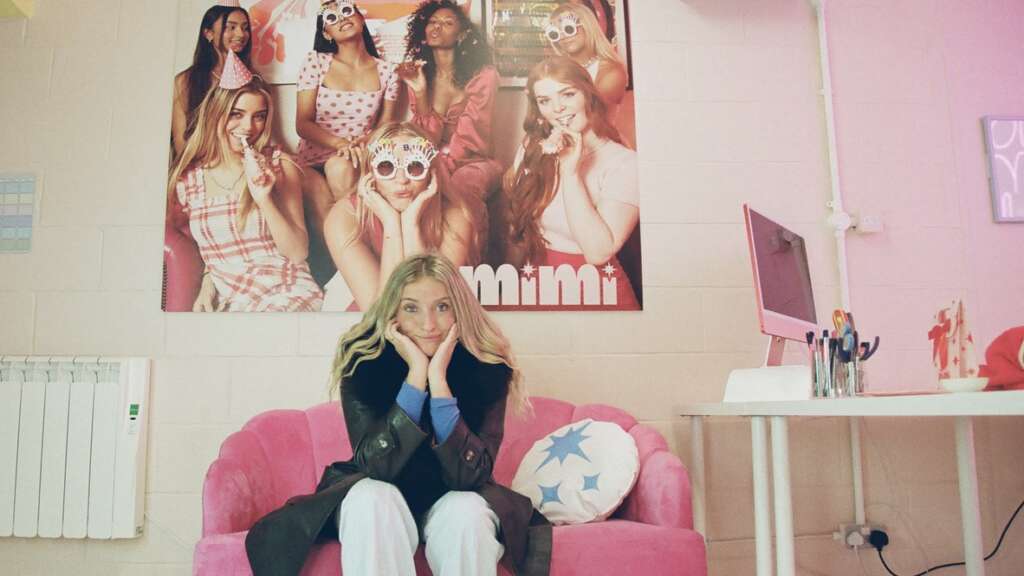 During the lockdown of 2020, 18-year-old Amelia Hitchcocks-Merrit launched ‘Bijoux de Mimi’. A year later, she has sold over 20,000 pairs of earrings and reached over 22 million views on Tik Tok. Bijoux de Mimi has become the only destination for teenage girls to buy the iconic colourful huggie hoops.

This success has been despite discouragement from her teachers in her early teenage years. Amelia was diagnosed with dyslexia while still at school but received no support from teachers that were adamant her dreams of going to Central Saint Martins would never become reality. After relocating to a supportive and inclusive school, Amelia was finally able to focus on her creative interests. With the help of her new teachers, she graduated with outstanding GCSE grades and a newfound confidence. She thrived when specialising in the arts for A-levels, again surrounded by an excellent support system. She graduated with full marks in her A-level Art and a place to study Fashion at Central Saint Martins.

Despite exceeding in education, it was never truly Amelia’s focus. At 16, she gained a summer internship and became a part of the VIP and Relations teams at Burberry. Following this, she became a stylist for Selfridges at 17, and then a social media intern for Meridethe Staurt-Smith. During these impressive endeavours, Amelia also worked as a teacher at The Fashion School, London. When considering her ambitions as a young creative, the success of Bijoux de Mimi comes as no surprise.

The inspiration for Bijoux de Mimi came to Amelia on a trip to Paris. After her interview to work at Dior children, she found herself in the jewellery district. She was inspired by the colourful gems, bought them back to England and began to sell them on Depop. It wasn’t until the lockdown of 2020, however, that Amelia’s boyfriend persuaded her to turn this hobby into a business. Bijoux de Mimi was launched on June 30th, 2020. Bijoux de Mimi saw such success from the start due to Amelia’s brand strategy of social media and influencer marketing. This allows Bijoux de Mimi to become humanised and communicate with their market on a personal level, giving the brand a loyal consumer base since the launch.

The brand has grown outstandingly since its founding last June. In the first month of business they turned over £650, whereas in July 2021 they turned over £32,000. Today, they turn over an average £1,500 in sales per day. This is even more impressive when considering Amelia started the business with only £400 and has grown organically since then. Amelia now has a staff of five, including a full-time studio helper. Bijoux de Mimi’s first birthday was marked by a pop-up shop on Oxford Street that saw hundreds of girl’s flock into store to buy the iconic huggie hoops. The pop-up was such a success as it capitalised on consumers want for the tactility and novelty of real-life shopping after COVID restrictions. It also confirmed Bijoux de Mimi’s status as an established brand. This status was settled further when the brand was awarded the highly commended, Emerging Brand of the Year at the UK Jewellery Awards. Amelia was the youngest person not only at these awards but also at several events at London Fashion Week. She was invited to brunch with several other successful CEOs, and to speak at a panel at BLVGARI hotel on start-ups.

Although Bijoux de Mimi has already attained these momentous achievements, Amelia still has ambitious goals for the future. She is aiming to host another pop-up shop at Christmas to benefit from the crowds of festive shoppers in London. Here she will stock limited edition Christmas advent calendars to make gift-giving for Bijoux-lovers simple. Her plans for the New Year also include a new subscription service for her regular customers. The main goal for Amelia is to have turned over £1 million by her 21st birthday in August, which she plans to do by constantly working on the growth of Bijoux de Mimi from a start-up to an established brand.