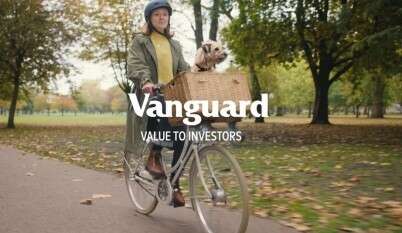 Building on the dramatic success of Vanguard’s first UK campaign launched March 2020, a new TV and radio led campaign brings to life Vanguard’s commitment to delivering value to millions of investors and opening up the benefits of investing to people of all ages and backgrounds.

We see a dad swimming with his daughter, a gardener, a cyclist and an older couple all sharing what they value and making the Vanguard ‘V for Value’ v-sign.

Vanguard is an investment firm founded in the USA in 1975 on the principle of providing value to investors, and launched its Personal Investor platform in the UK in 2017. Since then it has been named by Which? as a top-rated investment platform for customer satisfaction and value for money three years running. The company has also seen a surge in new UK customers with numbers more than doubling since AML’s first campaign broke.

Commenting on the campaign, Hugo Bone, ECD, AML Group says: “We wanted to create a joyful campaign with memorable moments that makes people want to be a part of the gang that’s switched to Vanguard – an investment firm that genuinely cares about its clients, giving them great value in every possible way.”

“AML have managed to capture and communicate the essence of our business, that first and foremost we aim to deliver value to investors.” says Laura Curtis, Head of Marketing, Europe, Vanguard. “Millions of investors around the world value getting Vanguard value.  Partnering with AML, we are hopeful more people will learn about Vanguard and our mission – taking a stand for all investors, treating them fairly, and giving them the best chance of investment success.”

A distinctive soundtrack using only human-made sounds was created by Simon Bass and a street choir at Pure Soho. AML creative team Lizzie Hutchison and Stephen O’Neill worked with director Greg Hackett at Spindle Films to direct TV and Nick Angell to produce the radio campaign. Media is bought by The7Stars and research is by The Nursery.

Searches For Selling Your House Fast Have Had...